For Burgundies and wines in comparable bottles, such as wines from Germany and Alsace, the filling level is indicated in centimeters. Measured from the bottom of the cork to the level of the wine. Levels less than 2 centimeters are not described. 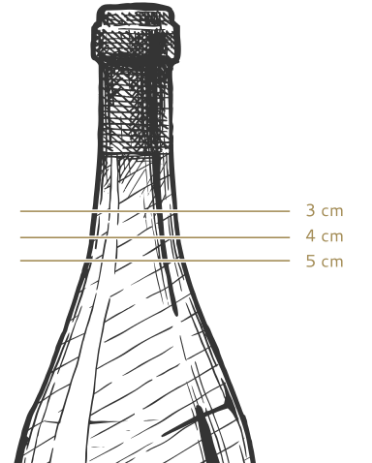 Domaine Sylvain Cathiard et Fils is a well-regarded family wine producer based in the village of Vosne-Romanée in Burgundy’s Côte de Nuits. It is known for its highly sought-after premium-priced Pinot Noir wines from plots in premier and grand cru vineyards throughout Vosne and the surrounding appellations.

The domaine’s history begins with Sylvain’s grandfather, who began making wine in Burgundy in the 1930s. Sylvain’s father André took over the winery in 1969, and ran it through to the 1980s when Sylvain became involved.

He initially rented parcels of vines from his father and other vignerons to make his own wine, before he eventually taking over the family’s vineyards. In 2006 his son Sébastien joined him and the domaine took on its contemporary name of Domaine Sylvain Cathiard et Fils. All the vineyard work is done by Sylvain and his wife and his son.

The domaine has roughly five hectares (12 acres) of vines spread between Vosne-Romanée, Nuit-Saint-Georges and Chambolle-Musigny, including a tiny plot in Romanée-Saint-Vivant. The most prestigious of its wines come from this grand cru vineyard, and the portfolio also includes several premier cru wines from both Nuit-St-Georges and Vosne-Romanée.

Cathiard also makes village-level Vosne-Romanée and a Bourgogne Rouge, both of which command high prices.